On Friday afternoon our Department hosted “back-to-class” event for students, staff and faculty. It took place at Rodman Hall, a beautiful 19th century mansion which has been turned into an art gallery. In addition to the beer and the barbeque, we also were treated to a presentation by and about Mark Adair. An exhibition of Adair’s works entitled, “Death is in Trouble Now,” had been on display at Rodman Hall all summer (the exhibition closed on September 16th). Many of the works in the show explored themes of environmental destruction and the sense of rupture that often exists between humans and the rest of the planet in our current society. These are works that are intended to make the viewer somewhat uncomfortable, as one critic noted, Adair’s work is “not for for faint of heart!” For instance, his sculpture entitled “Chicken Choker” is of a man who accidentally killed himself during an act of autoerotic asphyxiation. Adair cleverly links this extreme act with Western society’s ongoing consumption of goods and resources in the face of environmental degradation. What this piece references, then, is the absurdity of pursuing pleasure to the point where it becomes fatal; we are killing our planet and, ultimately, ourselves because of our continual and wasteful pursuit of goods and resources.

Much of Adair’s sculptural work references gothic carvings. Although it was probably not the intention of the artist, I also could not help but draw parallels between the bodies on display in this exhibit and the bodies on display in the Science and Art of Medicine exhibit I saw this summer in London. My favourite pieces in Adair’s show, however, were the small charcoal drawings featuring “Death” as the central character. Titles such as “Death Goes Sailing” or “Death Dreams a Martini” convey Adair’s wit and dark sense of humour. These pictures have a narrative quality to them, we can follow along as Death encounters a series of misfortunes. The central premise, according to the artist, is that Death has become redundant; the “grim reaper” is no longer needed as men and women are doing a pretty fantastic job of killing one another through wars and environmental destruction. 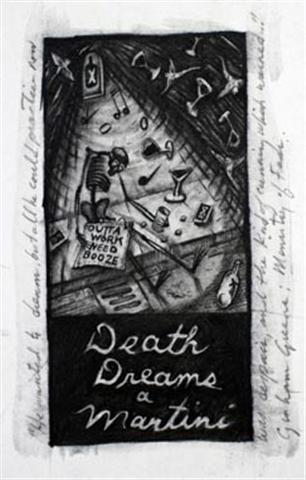 One thought on ““Death is in Trouble Now””